Here is a chance to used some of your old photos

That is our tutorial today at TTSTV.

I have chosen to use a pic of my mom and dad.
This is a pic of their wedding day in 1944. It is actually a separate pic
of each of them that I pieced together. If you look at it you can see where I pieced it.
I think the pic of my mom was  taken a little closer because my mom looks
taller than my dad but actually she is quite petite. She was
only 5'3" and my dad is 5'7".
Now there is an amazing love story behind this pic
Much much to long to share here but the quick highlite is...
They met in Topock, Az. when my dad was 19 and
mom 13, love at first sight!  He lived there and her step father's job brought
them there to work on the railroad bridge for a short time. Two years later
my dad was in the army preparing to leave for the Phillipines WWII.
My mom who actually
lived on a train part time because of her step fathers job,
was living in New Mexico at the time and
had no phone. My dad sent a telegram asking her to marry him
before he left. My mom was pretty independent and very mature fifteen,
she had traveled the country between her parents and family  alone since
the age of 7. My mom convinced my grandma  that he was the right one!!
My grandma wasnt able to go with her
but gave her money for a dress and shoes and bought her a
ticket to Florence, Az  My dad met her at the train station
took her to get a dress and shoes and
they got married at the court house. Seventy years later
they are still sweethearts!!

Since it is a 70 year old photoI wanted it to have a vintage
look so used the black, grey and celery green.The background
was embossed with the dotted swiss folder and stitched onto
the white. The celery oval is a
Spellbinder Opulent Ovals and the grey rectangle
is from the Spellbinder  Radiant Rectangles.I rounded the corners of the pic and foam
dotted onto the grey. The sentiment is from the Love Love Love Set.
The rose was cut with a Spellbinder Bitty Blossom
and a leaf cut out of some burlap. 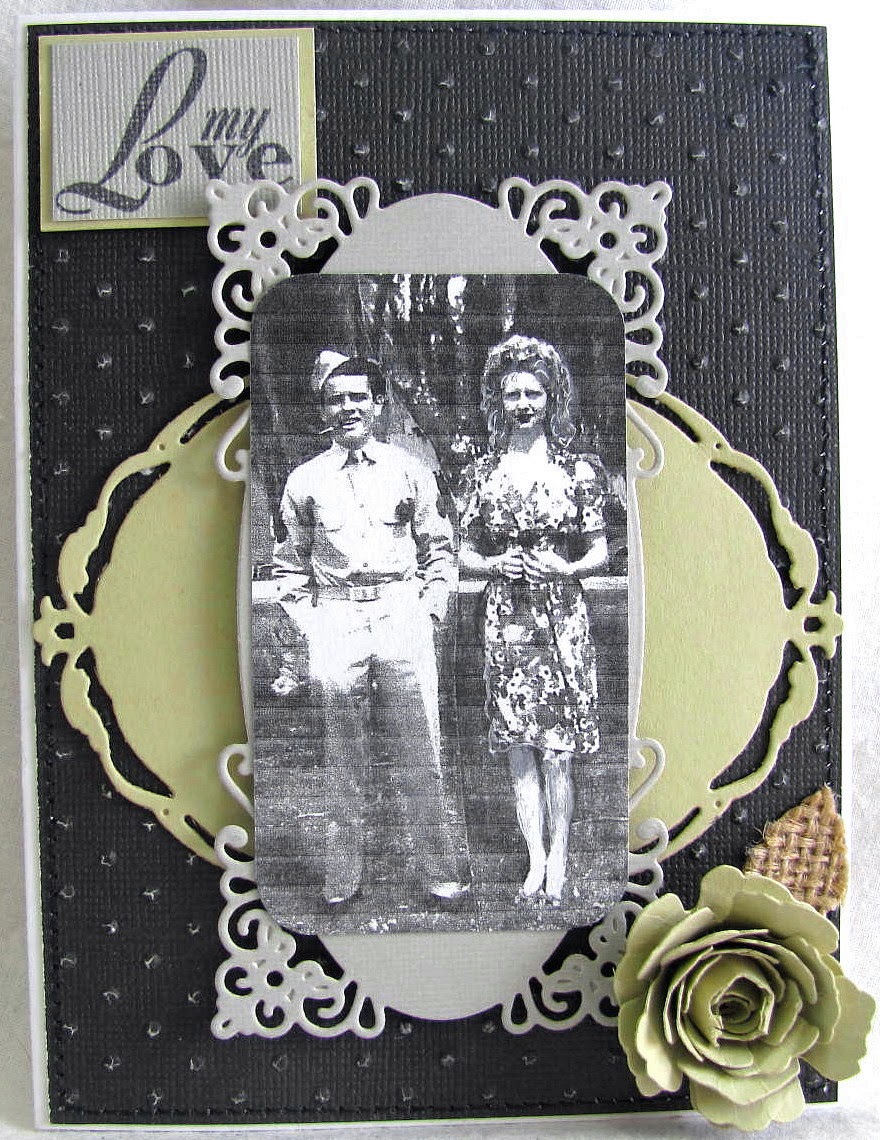 We all have fun ideas for using old photos so come check out
my teammates creations also!

What an amazing story!! And such a beautiful card ... I love the colours and that photo looks terrific!

Davi that is such a wonderful love story and to know they are still together makes it even more magical thank you for sharing it with us. Davi the card with the picture is beautiful, superb colour theme and embellishments, fantastic work
hugs
lorraine x

Davi, what a beautiful love story about your parents!!! A beautiful card too. Great the way you used the photo on here.
Lynn

What a beautiful story of your parents, Davi!! Thank you for sharing it with us!! I love how you pieced the photo together!! The card is absolutely gorgeous!! Have a great weekend :)

Beautiful card Davi, and the story is even more beautiful, thanks for sharing!

What a beautiful story ......Love the old photo..Lis

This is absolutely gorgeous Davi!! What a beautiful love story to go along with this stunning card, I love how you've pieced the photo of your parents together!
Hugs, Tammy

What a story and what a treasure of a card!!! Just beautiful. I would never have noticed you had pieced the photos together. Flawless. Thanks for sharing it with us!!
<3 J