Yipee Friday!! Today at TTSTV is a Anything Goes of sorts Challenge
.You can use any of The Thrifty Stampers tutorials.
I have chosen Makeup Chalk. Yesterday was a long day, one of those
things no one wants to do , attend a Memorial Service
. A friend of ours had a stroke last week and he went home to be with
the Lord on Easter Sunday. He had to be the most generous giving
Christ like man I have ever know!! He constantly gave to those in need,
one time he even gave his new Harley away and for that  God blessed his with another!
Randy didnt know the word can't, his favorite saying no matter
how difficult the job "Piece of cake!!"  He was Operations Manager for the city
and Assistant Pastor of his church. Randy will be Greatly missed by many!!
So I made a couple of cards for his  sweet wife Sheila and family.
I found an eyeshadow that was the perfect shade to match my papers and
used it to highlight the script embossing and around the sentiment. I don't know
the name of this kind of card but the base is flat and the triangular part opens
. Some stitching and a little flower to create a latch for the
triangle made a simple card.
I used the hummingbird from the Hum Along Set and the sentiment
was from the Island Life Set. All the Stamp Sets and other stamping
supplies can be found at Mark's Finest Papers a Heinrich Co. 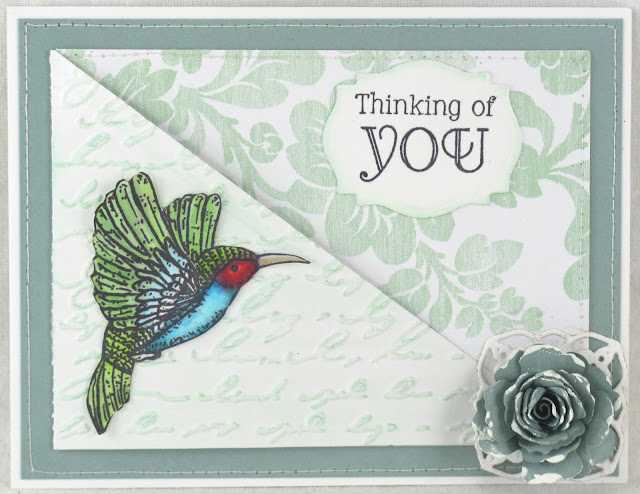 I made a second card using the new Glad Glads image, stamping it with some
SU ink and mounting to made a focal point. A little punching to made the border
and its done. I did some stamping on the inside but didnt take a pic. 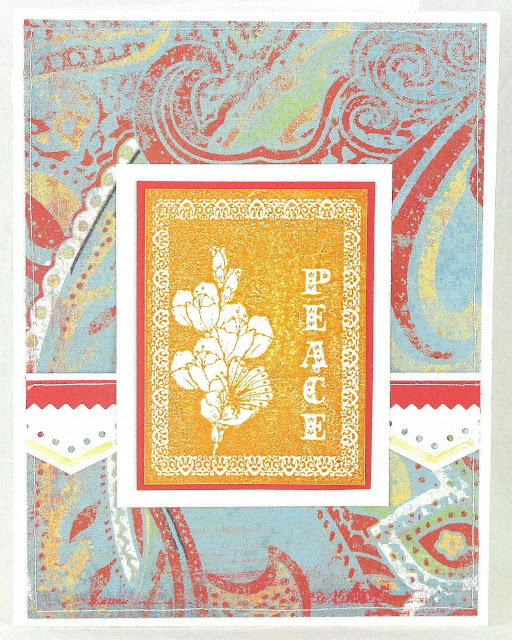 My teammates have all chosen different tutorials. Be sure to stop by....

Davi, your assistant pastor sounds as if he was the most Godly man he could possibly be and that kind of soul will be truly missed on this earth.

Your cards are so pretty and I'm sure they will be a great source of comfort.

I am so sorry for your loss. He sounds like an amazing man.
Your cards are gorgeous!!!

So sorry to hear of the loss Davi. :( I'm sure that the cards will be a ray of sunshine for the family during these difficult days. hugs, Kimberly

So very sorry for the loss Davi! These cards are so stunning and I'm sure will be very much appreciated by the recipient!! BIGGEST HUGS to you friend!!

So Sorry to hear of the Loss of your Dear friend. He sounds like a Wonderful Man... Both of your cards are just Beautiful Miss Davi!! Love the creative shading your did on he first one with the eyeshadow!! So Clever Lady! 8-) And the second one is so warm and cheery.. Love the colors and patterns.. 8-)

Davi,
So sorry for the loss of your wonderful friend - he sounds as though he was amazing. Your cards are lovely and elegant and sure to deliver comfor to your friends.

Beautiful cards! Love the shading on the butterfly card!

Sorry for your loss. Love the soft color of your card.

So pretty Davi! Lovin' the beautiful blossom on the first and fancy trim on the second! Hope you have a great weekend!

So sorry to hear about your loss Davi. He sounds like an amazing man.
Absolutely beautiful cards my friend! Gorgeous colors and design on both!
Hugs, Tammy

I am sure your cards will bring a little bit of comfort. Your friend sounds like he was a wonderful man. Your cards looks great.

These are both beautiful Davi, but my eye is really drawn to the first, which I find stunning. So clean and elegant. X

Lovely cards Davi ... I'm so sorry to hear about your friend ... he sounds like a really nice man ... I'm sure his family will appreciate your kindness ... and your amazing creativity

Oh Davi these are both truly wonderful creations I love the elegance of the first one, the papers, flower and the Hummingbird look awesome, the lovely colours of the second are gorgeous the stamp and background look superb.
hugs
lorraine x

I am so sorry about the loss of your friend. He sounds like he was an amazing person. Your cards are absolutely beautiful!! I love the designs...his family will, too!! Happy Sunday :)