make for lots of fun creations! 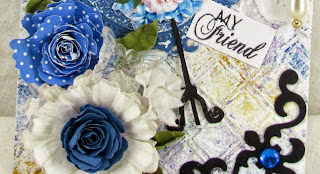 Friends of Speedy TV are challenging you to  use tags and banners  on your creations this week.I decided to do a little of both. I stated out to make a tag with some  little banners but just didnt go that way. I spent a lot of time creating a background with 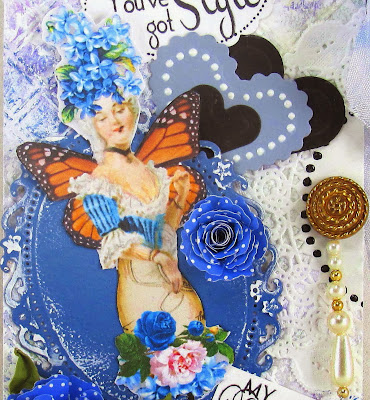 ink, sprays, paints,stencils and embossing to cover it
all up lol.  I dont know where I got this image but I
liked the funky look to it so that started the ball rolling. Used a Spellbinder floral oval to attach her to after cutting out.The hearts were also cut with a Spellbinder die. I made some flowers with punch and dies then added the little clear butterfly. then some leaves. Added a partial piece of a doily and dotted then strung some pearls and attached to the button.The sentiments come from two sets,         Dyed some ribbon to finish it up.In person the blues match much better and it has a softer look! 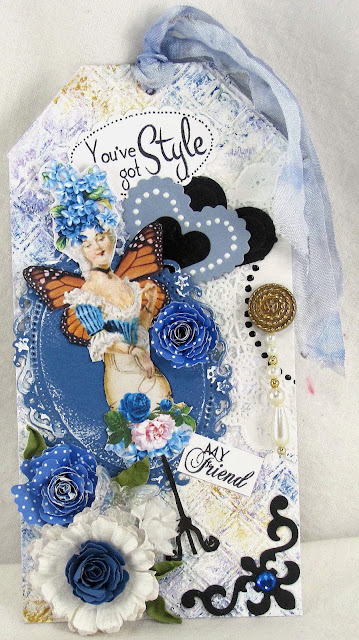 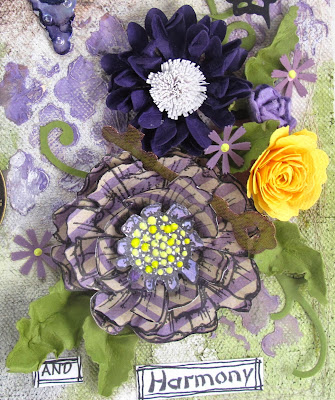 Since I have several upcoming birthdays these were made with specific gals in mind. This one is made on  a canvas.First I stitched pocket at the top by which to hang it, then added several rows of meandering stitching to the edges. The black side border was cut several Spellbinder dies then embossed with dotted swiss folder..  The  background was then covered with inks,dyes and texture added with stencils and paste. I made an assortment of flowers with punches, dies.and the new October Release Big Blossom. I stamped it four times on some striped dp, cut it out and layered for better dimension.Also cut a little metal key and added it among the flowers.I love old Keys, they always speak to me about, new adventures and treasures.Using a MFT die I cut several flourishes and cut out some leaves to go with them. After making the two groupings I used a Cherry Lynn die for the butterfly adding little pearl drops for his body. 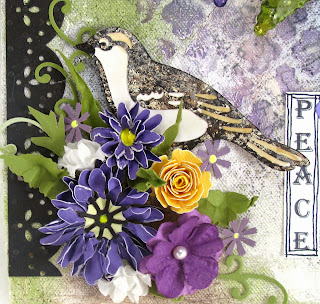 You know when you start on these canvases they consume you. The inks and dyes go on so nicely and blend easily I could make backgrounds all day long. Kind of reminds me of years ago when I used to do a lot of oil painting.

The bird was a chipboard cut out that I added color to then mounted on cardstock.  The dress form is cut from a PTI die, embossed and some pearls, stickles and ribbon added to.The time piece has a button and brad added to it instead of hands. I used the      set and          sets for part of the sentiment. I love the banner and how it turned out. It is made from pieces cut of thin metal with a Spellbinder die, embossed and inks added for color. They remind me of clothes on a close line lol! Using a long piece of wire I punched holes and strung them adding little coils between each little banner to drape. They are sort of fluttering about freely just like the butterfly. Here is my finished little hanger although it doesnt show I used a old wire clothes hanger and made some curly cues on the ends to hang it by. 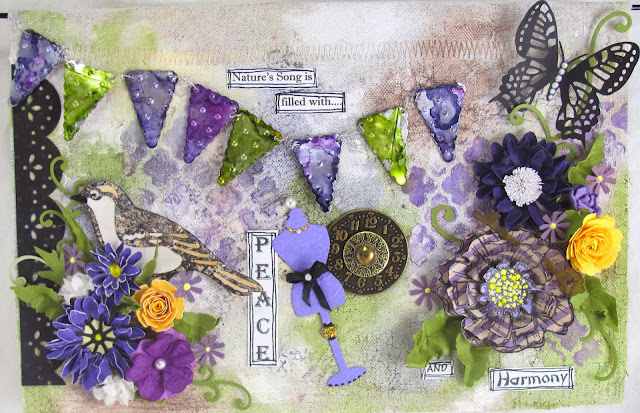 Lots of fun things you can do with this theme so hop over to the challenge and join in the fun this week. You could be the winner of the
Posted by Davi at 12:00 AM

OMG!! What fabulous creations!! I adore the tag ... so very beautiful ... Love all the rolled flowers and the colours ... Then I saw your canvas WOW!! Someone is going to be blown away by this gift ... It's amazing!!! I love every inch of it!

Davi, this is just awesome. I love the mixed media. The backgrounds are fabulous and I love that you used canvas, too.

Gorgeous creations!!! Love all those beautiful flowers, colors, everything!
Lynn

Gorgeous projects - love all the details. The tag is really pretty with the flowers and the canvas is amazing.

WOW Davi, you've been a busy girl... these creations are stunning!! I love both of them! Gorgeous embellishments, designs and I love all of your handmade flowers! I hope you have a wonderful week my friend!
Hugs, Tammy

Wow, wow, wow, Davi, these are absolutely gorgeous!! I love the designs!! You did such an amazing job!! I just love everything about these!! You rock!! Have a great evening :)

Beautiful Davi! I love both, all the details you did are amazing!! Whoever gets these will love them!

Beautiful projects Davi! Your banners look amazing! Lovin' all the beautiful blossoms too!

I just love the way that banner looks. Such wonderful projects my friend.. Makes me happy just looking at what you created. Its the perfect time of year there in AZ.. Enjoy the wonderful weather my friend.

WOW, Davi! I love both of your stunning projects. These are some of my favorites of yours. :)

Your work is so beautiful!!! I can see lots of love and effort on both of your creation!

gorgeous creations and I love the colors!
Groetjes karin x

Oh wow Davi!! This is such an amazing design my dear! Love the Vintage image and colors! HUGS :)