Todays TTSTV Challenge is brought to us by Thrifty Stamper!
It is make your own snow. It is made by shredding styrofoam. I used
the type of styrofoam that is compressed beads and trust me you will
make lots of beads but most of them will be stuck on you instead
of the card. I did try the dryer sheets to help cut down on the
stickiness but honestly it didnt seems to be to effective.
I shredded mine in a large plastic bag and it did help to keep
it contained.Once you get them on the card they do make some cool
snow.I was determined to use the beautiful cardinal but the snow
doesnt show very well. I should have used the image so the snow
would shown on the ground cutting my image out with the
Spellbinder Scalloped circle I colored it and then applied the
"snow" with glue, and matted on the plaid.
The little tabs were cut out of a SU Christmas print and stitched on.
The little red strip was the negative left from a Spellbinder
border die.The sentiment was cut with a SU punch and
foam dotted on. You will find my
Christmas Cardinal  image at MFP a Heinrich Co. 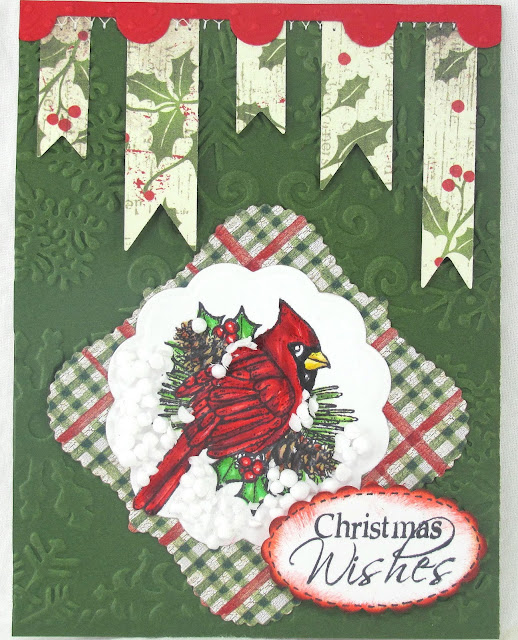 Oh my this is so stunning Davi!! I love the colors and the snow effect on your cardinal!! WOW!

I found it hard to use that kind of styrofoam. I think the hard stuff that you use for crafts would be better. Mine was flying everywhere!!! :)
Your card is Beautiful Davi!!!

I can just imagine that styrofoam everywhere Lol! You did a great job and such a pretty card too!

That made great snow.

Love the traditional colors for this gorgeous card! Lovin' that "snow" too - I'd probably have those little beads of styrofoam all over me and the house! Beautiful card.
Lynn

Oh wow, this is gorgeous, Davi!! The cardinal is so beautiful and the snow really makes him pop!! I can just imagine the styrofoam mess!! But it looks amazing as snow!! Love this!! Happy Friday :)

Such a pretty Christmas card Davi! That cardinal is beautiful and the embossed background looks lovely!

Great snow! I love all your use of various dies, great layout!

Hi Davi this is super, super, I love that image also the snow effect the traditional colours are lovely this is ACE.
hugs
lorraine x

Oh my...how gorgeous Davi! The cardinal is so pretty, and I am loving the whole card layout, just fabulous! Hope you're enjoying the weekend. :) hugs, Kimberly

Such a beautiful Christmas card. Lovely cardinal. So much reminding me of cooler days, which is quite nice at the moment, because it's so hot here! Hugs xx

A beautiful card with that cardinal and the papers are super. I can imagine that snow flying all over. Ha It turned out great, though.

I love this cardinal and your layout for this card - winter is coming way too soon in Michigan - at least for me!