Ours sponsor is Meljens Designs and they have the sweetest whimsical designs
for us to use this week. Since I have need of Christmas cards I have used all four
of the designs. Our CHALLENGE is What Christmas means to you.First and
formost for me its celebrating the birth of our Savior. 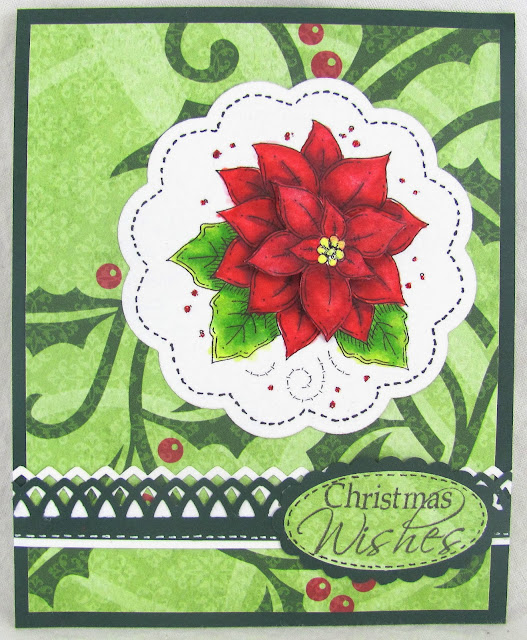 For the first card I used the Pretty Pointsettia image, printing it twice, cutting it out and foam dotting onto the base, which was cut with a Spellbinder Scalloped Circle. The little dots were Stickled with red for a little sparkle. The punched edgings are made with a MS punch. The sentiment was punched out with SU punches. 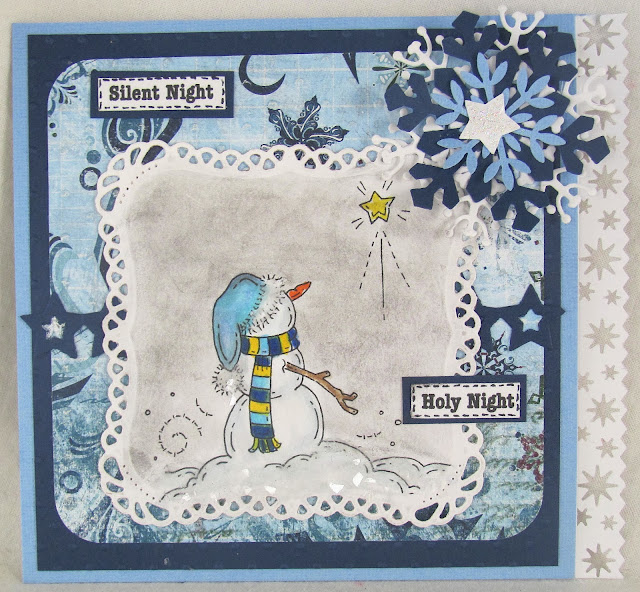 The Second card uses Star Snowman. I had a piece of blue that was printed with lots of swirls and
snowflakes but they dont show much.In person the light blue is a nice match. Two of the snowflakes
are MS and the lacey one was a gift from Cheryl a former teamie and I dont know who makes it. I think it must be one from the UK. The star is a Spellbinder folded for a little dimension. The sentiments
were computer generated. 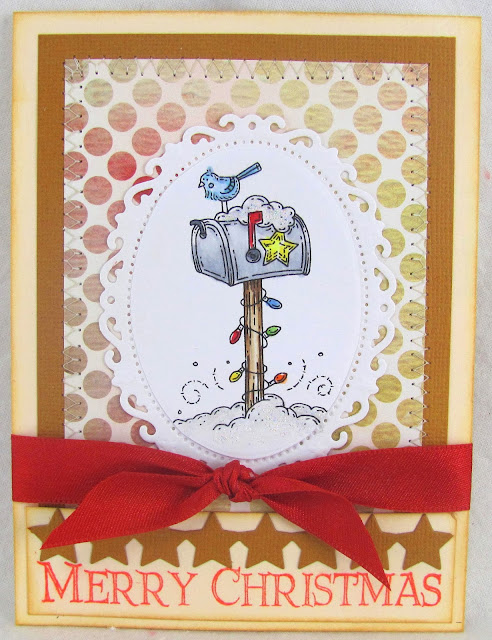 The Third uses
Cheery Lights, which
I colored and cut
out with a
Spellbinder floral
oval. Next I  added
Stickles on all the
snowy areas for
some added
sparkle. The
dotted dp had a
bit of red shading
here and there
but I decided to
use the gold as a
backing and red
ribbon for the
accent. I used
some Tim Holtz
ink to distress all
the edges on the
creme base and
on the sentiment.
The stars were
cut with a PTI
border die.

The Fourth uses Marshmallow Snowman, I printed this one three times in graduated sizes and colored. Although it doesnt show I used raised paint to make little snowflakes plus added two sizes of the punch outs. It does look cute in person. Some fun non traditional dps and stitching to make the layers and a MS punch for the bottom edging backed with the aqua so the punch outs would show. The little red tab was made by stamping on red then cutting out with a Spellbinder oval. 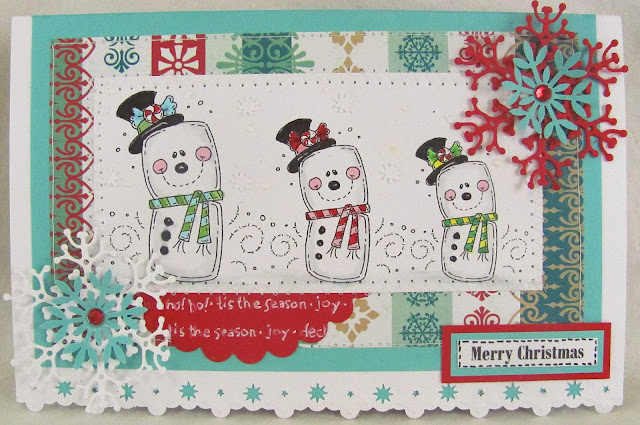 Such pretty cards, Davi. You know I love snowmen and birds and your poinsettia is beautiful, too. You've been a busy girl. I want to find time to get crafty but so much to do with so little time. Yikes!

Such a sweet collection of fabulous cards Davi! Love the beautiful Poinsettias and cute snowmen!

All of the cards are absolutely gorgeous!! I love the images you used!! They look fabulous!! Have a great day :)

WOW! What a busy girl you've been Davi!! :) I love each and every one of these! I don't think I could possibly choose a favorite! Thanks for sharing and enjoy your break! HUGS

Davi, these are WOWSERS!!!!!!!!!! Each and every one of them are so pretty! I love that big poinsettia and the snowmen, and the mailbox......and on and on and on! A wonderful set of cards for the holidays!
Lynn

Your cards are just adorable! I love the cute images and you've colored it so nicely! Beautiful work!

So many wonderful card Davi.. Love them all..

WOW! These are seriously gorgeous, Davi. There's one for every taste. Great job, my friend!
hugs,
Asha - Sunny Summer Crafts

WOWZERS! I love all your cards using Melgen's Designs! But I especially love the poinsettia card!!!!

Oh my goodness, you've been busy Davi! They are all fabulously done. Love the layering you've done on your flower and the snowflakes, just beautiful, and your coloring is so pretty too! hugs, Kimberly

WOW Davi, all of these cards are gorgeous!! Fabulous coloring and designs on all... I think my fav is the marshmallow family! I hope you have a great week my friend!
Hugs, Tammy